Your Bathroom Choices Make the Difference

In this blog I discuss the consequences to my own family of not making the right choices when my mom needed help to retain her own independence.

Failure to Make the Right Moves After an Injury

After my mom’s injury, I watched as my loving, healthy, socially-active father was forced into becoming a primary caregiver. He helped her with all of her activities of daily living. As Mom’s condition degenerated rapidly, he also became the primary target of her increasing anger and frustration. Her cognitive abilities decreased significantly due to a series of minor strokes. She became abusive and combative toward him, behavior I never saw from her before.

George’s mom’s bathroom at the time of her accident

The stress of dealing with my mother’s pain, mental degeneration, and dependence on help actually put him at a very significant risk. I watched helplessly as he, too, deteriorated from all the stress. A major source of stress was caused by his needing to get her into and out of that bathtub to bathe.
Bathing suddenly became an even greater danger! And not just for Mom—for both of them!
Following the accident, Mom could no longer bathe independently. We had installed a grab bar on the back wall, and a clamp-on grab bar on the outside edge of the tub.
As Mom was not able to bathe herself any longer, Dad was forced into serving as her bathing assistant. Soon, it was virtually impossible for Dad to bathe her alone in our traditional bathtub. Avoiding slipping and falling on the wet floors was a constant challenge for him, and he was actually over-exerting his back and shoulders trying to lift her and brace her during transitions.
One day, he hurt his back and his rotator cuff trying to transfer Mom into and out of the tub. We were grateful that his injury was minor, but knew that things could NOT continue like that.
He was forced to move her bathing into the shower area so she wouldn’t have to step over a sidewall to enter the tub, and also to keep from putting a movable seat inside the tub (we were told to avoid this setup if there was a shower available, as this approach to showering inside the tub was very unstable and dangerous).
We put a waterproof stool and a couple of grab bars into the shower stall, and attached a handheld shower attachment from the old shower spout. I thought we had done the best we could. The healthcare professionals were telling us that this was “all we could do”.
The Bigger Picture
No longer being able to bathe was a big issue and a major emotional setback for my mom’s sense of self-esteem. She loved her baths! She loved to soak and enjoy the relaxing escape afforded by spending time in warm water. Access to warm, healthful water was an important quality-of-life factor for her. This turn of events caused Mom greater frustration and stress (and therefore, the same for Dad). 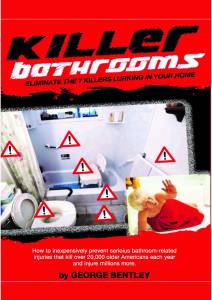 George even wrote a book about his experiences and how to avoid them! Contact eric@bentleybaths.com for a free copy!

Hiring poorly-trained caregivers to come in proved unreliable and hugely expensive. Plus, my Mother hated (and I mean absolutely HATED!) the emotional trauma and embarrassment of strangers undressing and bathing her. My mom was always a very private person, and she could not understand why my father would allow for such an indignity. She now had another major point of conflict, stress, and anger with my father.
The simple truth is that my parents’ quality of life was at rock bottom for many, many months. Finally, there was no reasonable option (that I knew of) other than a nursing home. Of course, we all told ourselves “this is only for a while…just until Mom gets better!” We were completely in denial!
In hindsight, I think we all knew she was never coming back home.

Remember my mom’s clearly-stated intention to live in her own home to the end? Well, our being led to believe that we had no choice but to put her in a nursing home was the beginning of the end for my mother. Because of our denial, we did not plan accordingly, and did nothing to change the home to accommodate Mom’s potential return. The disappointment, betrayal and sense of failure she felt was visible in her eyes every time we visited, even though she would never say a word about it. She did beg my father to get her out of there. Visiting became a major trauma for them both, but he went every day, twice a day.

Fact is, once in a nursing home, my mom died fairly quickly. Technically, she aspirated, meaning she suffocated on her own fluids. But, I believe my mother decided she had had enough. I believe in my heart that she gave up, and passed away after a few months… to save us all from the financial trauma, and as an acceptance on her part that she would be not be returning home.

Stay tuned for the next installment of the Bentley Baths blog, in which I discuss how Medical Hydrotherapy® can turn ordinary water into a healing machine.

What is the Best Walk-in Tub Therapy System for You?

Increase Accessibility in Your Home for a Reasonable Price

How You Can Afford a Walk-In Tub

Get a Quick Quote

One of our experienced consultants will be in touch with you shortly.